Looks like Mountain Jam is moving from Hunter Mountain to Bethel Woods this year. JRAD will be there, along with headliners Willie Nelson and Gov't Mule. The rest of the line up will be announced today and tickets go on sale tomorrow. Should be fun!

After 14 years at Hunter Mountain, the Mountain Jam music festival is moving to Bethel Woods Center for the Arts, on the Woodstock site in Sullivan County.

The gathering will be held June 13-16 on the property that hosted the Woodstock Music and Art Fair in August 1969.

Mountain Jam was originally launched in 2005 as a one-day celebration of Radio Woodstock’s 25th anniversary.

Bethel Woods, said Mountain Jam founder Gary Chetkof, “is like going to the Taj Mahal of sites. It’s all about being on an amazing piece of land. What could be more amazing than Bethel Woods and the home of the Woodstock festival... It was really just a matter of going to the promised land.”

The Hudson Valley will be well represented at Mountain Jam, with Gov’t Mule keyboard player and Ulster County resident Danny Louis; Ulster County resident Amy Helm; and the Big Takeover, which formed at the State University of New York at New Paltz and features Town of Poughkeepsie resident Neenee Rushie as lead singer.

Tickets for the 15th edition of Mountain Jam go on sale at 10 a.m. Friday at http://www.mountainjam.com. Car-side camping and glamping will be available. Mountain Jam this year is partnering with concert promoter Live Nation, after working with Townsquare Media from 2013-2018.

The Mountain Jam announcement on Wednesday comes as music lovers gear up for a full slate of festivals in 2019. There are two Woodstock 50th anniversary concerts set for August, one at Bethel Woods; and the Clearwater, Taste of Country and Tail Winds festivals set for June. The annual KFest event, which for the last two years has been held at Bethel after moving from Dutchess Stadium in Fishkill, is also expected to return for another year in 2019.

Asked about the competition, Chetkof said, “I think that Mountain Jam, obviously, has staying power and continues to evolve. I think moving to Bethel Woods is part of that evolution.”

The Mountain Jam announcement on Wednesday comes as music lovers gear up for a full slate of festivals in 2019:

The Clearwater festival will be held June 15-16 in Westchester County.
The inaugural Tail Winds Music Fest will be held June 29 at Hudson Valley Regional Airport in Wappingers Falls.
Bethel Woods Aug. 16-18 will host the Bethel Woods Music and Culture Festival.
Lang on the same weekend will host Woodstock 50 in Watkins Glen, Schuyler County.
The 2019 edition of Mountain Jam marks a return to the festival’s origin. After hosting such acts as Bob Weir and Phil Lesh of the Grateful Dead, the Allman Brothers Band and Tom Petty, Mountain Jam took a different direction in 2018 with bands that included Jack Johnson and Alt-J.

“I thought the music was amazing,” Chetkof said. “...We just didn’t have the right balance. We went a little too younger and a little too hipper than we should have. We learned a lot.”
Top

Re: Mountain Jam 2019 at Bethel Woods

Time to move this thread from Music to General Discussion now that Phil and Friends were just added to the line up! I see a sit-in with Warren coming! 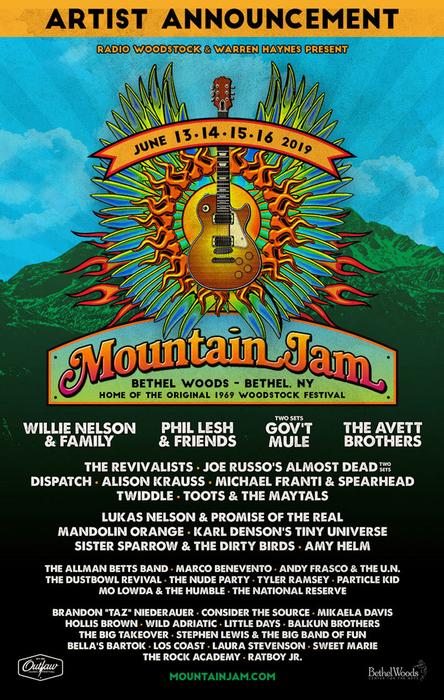 They can carpool
Standing on the moon with nothing left to do
A lovely view of heaven but I'd rather be with you.
Top

wonder if they are importing the 5-0 from mountain jam?
"gleeful amphetamine drip"

JRAD is live now from the Mountain!